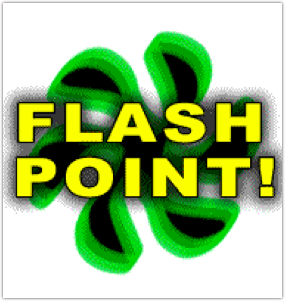 FLASHPOINT ORIENTATION DOCUMENT
LAWRENCE DEBATE UNION
We tape our television program at Vermont Community Access Media as well as in other locations.
The program is designed to be a fast-paced discussion of some important issue featuring informed citizens. Almost always they are those associated with the LDU but we also invite selected debate colleagues and friends to join us. We do not aspire to having experts tell us what to think, but to show that well-informed citizens are able to think for themselves.
The program is taped in one 28-minute segment without stops or pauses.
Here are some things to keep in mind:
·       Make yourself heard. Initiate, comment on what other people have said, and feel free to disagree.
The format is as follows:
If you are a first timer feel free to watch a show and then get involved.

Flashpoint is the regular television program of the Lawrence Debate Union at the University of Vermont. The program now has over 420 shows to its credit. Flashpoint is a program of issues and ideas. Debaters and coaches from the LDU pick a topic and research it intensively before the program.
Available as podcasts at http://debate.uvm.edu/debateblog/Flashpoint/

The program consists of a fast-paced discussion of the topic and its related issues. Experts are not sought for the program, because it attempts to show that intelligent citizens can learn about an issue for themselves and then have informed and logical opinions -- which is what citizens should do. If you have comments about our program, please contact us at debate@uvm.edu.

The program has been filmed at the University of Vermont and around the world, but is mostly filmed at the studios of Vermont Community Access Media (VCAM) in Burlington. It is aired on Burlington cable channel 15 three times a week. It is also available through Burlington Telecomm. Selected programs can also be viewed online as streaming videos at this and other sites. Older programs can be seen at http://debate.uvm.edu/flashpoint.html.

Remember our motto, "Think for yourself!"

The programs here can be downloaded or viewed depending on whether they are in the QuickTime or the RealPlayer format. Many are available as streams from Vimeo. Some episodes were provided via Google Video. When Google Video ceased accepting new files, we moved to Vimeo.com as our video server. If you cannot get an episode that is in GoogleVideo, simply search by episode number using the search box at the upper left and you will find the Vimeo version that has replaced the GoogleVideo. Let us know if any videos are failing to serve. alfred.snider@uvm.edu

See our complete Flashpoint video archive at
http://www.uvm.edu/~debate/watch/ They are available by episode number and program title.

See a list of all of our websites at http://alfredsnider.blogspot.com/2009/02/my-websites-index.html

Links to other LDU related sites